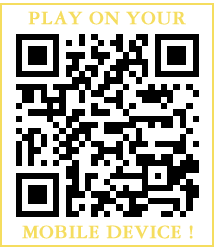 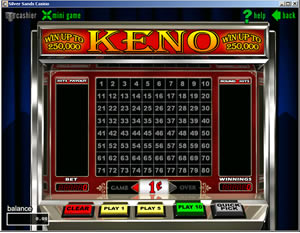 Keno is one of the best games to play because it is so easy to learn. It is one of the oldest games played in casinos. Keno and lottery games are very similar in the way they are both played.

Select your wager amount which is located the top right of the Keno Card
Use your mouse to select one to fifteen numbers on the Keno Card or click the Quick Pick 10 button to randomly select ten numbers
If you would like to deselect a number, just click the number again and it will no longer be selected
When you select or deselect the numbers, the pay table located on the upper left hand side will change accordingly
Click the Play RRR button.
Twenty (20) numbers will roll out in random
Once the 20 numbers have been rolled out, there is a table to the left of the Keno Card that informs you of how many numbers you predicted correctly according to the amount of numbers chosen, Total Bet amount, and the Total Payout amount.
If you have successfully predicted a number, your Keno Card will show a star rotating on the number. The other numbers will be highlighted on the Keno Card. When all twenty numbers have been rolled out, you will be paid according to the pay table, located in the upper left side of the Keno Card, resulting in the correctly predicted numbers indicated by the rotating star. If you would like to play the same numbers for the same wager, just click the Play RRR button again. If you would like to play different number(s), click the clear button to clear the selected numbers.

Pay Table
The Pay Table is represented by odds. The actual amount paid out is the wager amount times the odds. For example, for one pick and one catch, the pay table lists 3. This means 3 times the amount of the wager. Wager amounts can be R1, R5, or R10. If a player wagers R5 on a card in this scenario, the player would win R15.

Clear
The Clear button removes all currently selected numbers on the selected Keno Card only.

Play RRR
Starts drawing and rolling out the numbers and they appear on the bottom of the screen and the numbers will also be highlighted on the Keno Card.